A few months ago I was invited in to Chwarae Teg to discuss revamping their offices. This wasn’t going to be a cosmetic revamp, but one that would make people think and work more creatively and collaboratively. It truly was about making Chwarae Teg a great place to work. It was also about putting into practice their thinking around modern working practices, which is replacing the work-life balance agenda.

As I listened to John talk about his vision for the office and the difference he wanted it to make to the way people worked, and felt about coming into work, it was obvious that rather than outsource the design work John could do it himself.

As well as having the underpinning knowledge of the Chwarae Teg brand, ethos and future direction, John has a great sense of colour and style.  I’d done an interior design diploma years ago so I showed John how to draw out his ideas for key parts of the office. I also suggested he start a mood board to collect samples, ideas and colours together. 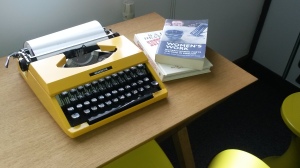 Today I had the pleasure of seeing the outcome.  I heard John explain the reason for each new addition to the office. The yellow type writer, in the new entrance space, not only looks cool and retro but is ‘a nod to the secretarial and clerical roles traditionally associated with women in the post war workplaces.’

Female carpenter, Phillipa Skinner was commissioned to create transparent screens that allow them to section off part of the office for training events.

They have hot seating for most of the staff and areas for ‘huggers’ who prefer the same space. Consulting with everyone in the team was a key part of the process. There is a vision board with the heading ‘Dream Office’ which everyone has contributed to. Now tell me one person who wouldn’t love to do this in their workplace?

Other features include a creative space, although I think the whole office encourages creativity, a ‘zen den’ for quiet time and  one to ones, and a hot desking area for female business start-ups.

Radically the ‘boss’, Joy Kent, doesn’t have an office of her own but hot desks too! Talking of the boss, it takes a certain kind of person to trust her staff with such a huge ‘outside-of- job-role’ task. Enlightened leaders know that their staff have a multitude of talents and it’s often a question of opportunity and permission to allow those talents to emerge- for the benefit of the organisation and the person themsleves.

The rewards for the organisation are exponential.  When people feel empowered and inspired they will contribute far more than their JD.  John was given the opportunity to access the interior designer within– just imagine what other talents lie within the rest of the Chwarae Teg team and where that will take the organisation?

The project is the subject of an academic study- so watch out for details when it’s complete.

I must admit I feel a little proud to have had an input into this- through a gentle nudge of encouragement.